As both a music lover and an Mac/iOS user, i’ve been extremely eager to try the service out and compare it to both Spotify, my current streaming service of choice, and Tidal, which I reviewed in March.

In the run up to its launch, Apple Music has had a bit of a rough run. Though artists were initially happy that Apple would be giving more of its revenue to rightsholders, there was frustration among many that it wouldn’t be paying any during its three-month free trial and of allegations of strong arm tactics over that.

However, after an open letter from Taylor Swift, Apple announced that it would pay royalties after all (which led to some interesting conspiracy theories).

After that change, much of the controversy seemed to die down. Taylor Swift and Apple in particular made up, with Apple Music becoming the only place to stream her newest album, 1989. Even AC/DC, long time music streaming hold out, opted to open up its albums to music streaming the day Apple Music launched (though AC/DC is also on Spotify and other services).

So, after the rollercoaster of a month, how did Apple Music pan out? For me the answer is pretty complicated. However, over all, I think I may have a new reigning champion for streaming music in my household.

What Is Apple Music

Apple Music, fundamentally, is a music streaming service. That means, for a flat monthly subscription, you get to listen to Apple’s library of millions of songs, nearly everything available for purchase in iTunes (thought not quite everything). The service also features on-demand streaming music videos and performance videos of many of the bands.

In addition to on-demand streaming, Apple offers various radio stations, including its new Beats 1 Radio, which features 24/7 music selected by music industry experts and headed by Zane Low, Ebro Darden and Julie Adenuga. Indeed, human curation is a major part of Apple Music, with hand-picked playlists and recommendations available throughout the service.

For its service, Apple charges either $9.99 per month for an individual subscription or $14.99 for a family plan, which allows streaming on up to 6 different accounts. There currently is no free tier though users without an account can access the radio stations.

Currently, Apple Music is available on iOS devices as well as Windows and Mac computers running iTunes. An Android app is coming this fall.

All in all, Apple Music is a fairly straightforward offering, what is going to separate it from Spotify and others is how its implemented and that’s where things get more complicated. 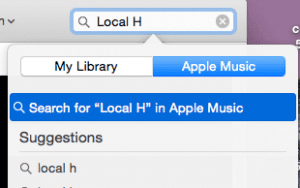 I tried Apple Music on both my iPhone and my Mac through iTunes. In both cases, the user interface was, in a word, terrible.

The reason is fairly simple. Where Spotify was built from the ground up to be a music streaming app, Apple stuck on the music streaming functionality onto their existing music players.

In both versions, the app puts up what feels like a false separation between “My Music” and “Apple Music” (as seen in the screenshot). This separation permeates everything in the apps, from search to playlist creation and it can be very frustrating.

The UI issues go well beyond that. As one user pointed out, playlist creation is a mess. On iOS the process requires four taps to add a song and seems to lead duplicate songs or entire albums being added to a playlist instead of just the tracks I want. On the desktop, there’s no way (that I can see) to drag/drop Apple Music songs onto a playlist. The easiest process involves three separate clicks, one on the track, one on the “Add to” function and one on the playlist.

However, adding songs I own to a playlist is much easier, I can just either just edit the playlist itself or even drag and drop. Somehow, this functionality didn’t make it into Apple Music, once again, because of the divide between “My Music” and “Apple Music”.

This is especially disappointing from Apple. It’s a company well known for taking very complex things and making them very simple. Here though, Apple has taken something very simple and made it needlessly complex.

Apple Music also misses the mark when it comes to social. Though Spotify’s closeness to Facebook has been uncomfortable at times, its had its benefits as well. With Spotify, I’m able to share and collaborate on playlists with friends, publish playlists publicly and generally make music a more social experience.

None of that is possible with Apple Music. I can’t have friends help me build a playlist, I can’t share a list I’ve created and I can’t post or embed a playlist publicly. I can’t even share my playlists among other members of my family plan.

So, when it comes to pure usability, either Spotify or Tidal are the hands-down winners. However, that isn’t everything when it comes to music streaming and there are plenty of things that Apple does get right.

Though, as we discovered in my Tidal review, I’m not the best person to talk about music quality, Apple Music does sound a little bit better to me in side-by-side comparisons with Spotify. However, it doesn’t sound as much like a Bitrate difference as it does that the songs are somehow leveled different.

Listening to the same track back to back on Apple Music and Spotify, though they sound about the same in terms of cleanness, Apple Music seems to have more bass and it changes the sound. While this works well for the music I listen to, I could easily see others preferring Spotify.

All in all, the music quality is more than adequate and does very well on my headphones and I find myself ever so slightly preferring Apple Music for the harder rock songs I listen to, though I’m neutral on other tracks. Still, either is more than fine for me.

Apple Music also scores a win with its library. Though I’m not a Taylor Swift fan, I recognize the that presence of 1989 in Apple Music is important to many as are other exclusives such as Dr. Dre’s The Chronic. More importantly though, nearly all of the artists I know and love are in there, including those that were missing from Tidal.

So while Apple Music’s library is better than Spotify’s on paper, the difference doesn’t mean a great deal to me. What’s more important is that it is solid enough to meet all of my needs and fully replace Spotify if desired, unlike Tidal.

However, where Apple Music really shines is curation. Many of my friends, and at least one member of my family, prefers Pandora to any other music service because they don’t have to curate their own playlist. Apple Music makes it easy to either listen to automated radio stations or to human-curated ones if you prefer.

The selection of music in a service like Apple Music can be overwhelming and Apple does a good job making it much less intimidating. Best of all, it uses its knowledge of the tracks you’ve purchased and uploaded through iTunes Match to make it so that they have a good understanding of you and your tastes.

Because of this, if you’re new to streaming music, Apple Music might be a great place to start. Where Spotify’s attempts at radio have been more hit and miss for me, Apple Music did a great job honing on on my tastes and delivering songs that are at least interesting.

Finally though, Apple Music has some pretty unfair advantages over Spotify and other streaming music apps, first and foremost is the fact that it’s the built in music player on both OS X and iOS. This means two things:

These integrations can be very powerful. One of my favorite running apps, Zombies, Run! integrates tightly with the music app and using external music apps, like Spotify, is significantly limited.

This can actually be a huge edge for Apple Music as more and more apps will find ways to integrate Apple Music and its library, such as the upcoming integration with Sonos.

While Spotify has an API, it’s much more limited and doesn’t allow commercial apps, something that shuts out many of the best uses.

It’s also worth noting that Apple Music has a decent library of music videos. While that library isn’t nearly as large as YouTube’s or Vevo’s, it covers most of the major songs I searched for and it’s convenient having the videos next to the songs as I search for them.

Spotify, of course, doesn’t have any music videos at this time.

However, perhaps the biggest advantage to me for Apple Music is the price. While the $9.99 price tag for individual users is not extraordinary, the $14.99 family plan is great for my family of four. A similar account on Spotify would cost us $24.99, or $10 more per month. In short, I can bring on up to six people for the price of two on Spotify.

While that might not seem like a huge deal, it gives me 120 reasons per year to make the switch.

In many ways, Apple Music is no home run. This could have and should have been Apple’s crowning achievement in music. A great music streaming service with a clean, simple Apple UI could have easily put them far ahead of Spotify and their other competitors.

Instead, their service is hamstrung by terrible interface design, confusing language and a complete lack of social features. Where Apple could have blown Spotify out of the water, it instead gave Spotify users many good reasons to hang onto their existing service. However, there are also many good reasons to switch. Apple Music has a larger library, tighter OS integration, music videos, better music discovery and, for many users, a lower price point.

As such, if you are a Spotify user, your next move will likely depend on your exact situation. If you have more than two people on your plan, want help discovering new music and want additional developer tools, Apple Music is the way to go. If you just have one or two people but love the sharing/collaborating on playlists and do a lot of work within the app itself, Spotify will make you happier.

For me, as bad as the UI is, I can suffer through it. I’ll set up my playlists once and probably not do much within the app other than put those lists on shuffle or open up a radio station. I can gnash my teeth and get through it fine. I’ll likely miss social playlists but I haven’t done much with those in over a year.

As such, right now Apple Music is looking like it edges out Spotify for me personally, though I won’t know until the end of my three month trial if it stays that way.

But while it’s a win for Apple Music here, it should have been a blowout considering all of the advantages Apple had going into this. But, when it was all said and done, Apple failed to exploit its upper hand and only has itself to blame for the fact Spotify is competitive at all, especially on OS X and iOS.

Apple turned out not be a 300 lb gorilla, but it is still a major player with a compelling offer. Let’s jus hope they fix the interface sooner rather than later.