However, Google has begun testing what could be a second source of revenue for some webmasters, a program entitled Google Contributor that allows users to pay a small monthly subscription to receive ad-free viewing on participating websites.

The plan is currently an experiment and only 10 publishers are participating. However, some of those sites are among the biggest on the Web including image-hosting site Imgur, news site Mashable and parody site The Onion.

While the system is invite-only now, many webmasters are likely looking to it for future adoption. But is Google Contributor something you should consider or is it something you should take a pass on? The answer depends on your situation and your comfort level with Google.

The Idea Behind Google Contributor 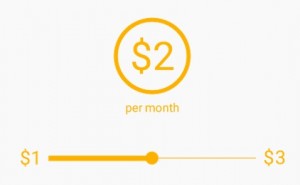 The idea behind Google Contributor is fairly simple. Even a regular visitor to a site is unlikely to generate more than a small amount of advertising revenue. So, even a very small monetary contribution, if obtained monthly, will likely be more valuable even after being divided up across other sites on the network.

Even at a dollar or two per month, the website (and Google) likely earn more from the single visitor than they would have by advertising to them.

With that in mind, through Google Contributor, a user can opt to pay between 1-3 dollars per month and have all of the Google ads on participating sites replaced by a thank you note. Those sites then share the revenue.

The idea of paying to remove ads isn’t new. Many sites, including Imgur, one of the test publishers, already offer pro plans and paid subscriptions that remove ads (and other limitations) from the site. Reddit also found success with a similar approach in 2011 with Reddit Gold, an experiment that continues today.

Still, as many advertising-based websites wrangle with adblocking, a problem that has been going on for years, the idea of a win-win for readers and the sites they love may be appealing to many webmasters.

Despite that, it’s unlikely that Google and the sites it has partnered with will find great success with this program. The reasons for that are very clear.

Limitations of the Program

As interesting as an idea as Google Contributor is, there are some pretty gaping weaknesses that will probably keep it from achieving the success it wants.

But all of that being said, Google Contributor is still likely a good idea for webmasters when they are able to sign up, especially those who only use Google ads.

The reason is simple. Every dollar earned from this program is a dollar that wouldn’t have been earned any other way and the revenue from this will, most likely, outpace the revenue that would been obtained from running ads.

So, even if only a handful of visitors participate, it can still help pad the advertising bottom line a little bit and in a way that doesn’t require significant changes or effort.

In short, while it’s not likely that this service will take off in its current form, it’s still a chance to earn a bit more revenue and get a few dollars that were not available before.

For consumers, the benefit of Google Contributor is likely limited. Their contribution means that they will see thank you notes replace ads only on Google ads among participating sites. No ads are removed from non-participating sites and the ads themselves aren’t actually blocked, but rather, are replaced.

While $3 per month is not a lot, it doesn’t buy a great deal either.

For webmasters it is a slightly better deal. The revenue is likely greater than what they could obtain from advertising normally, but transparency issues do cast some doubt on that.

For most sites, if you are wanting to offer paid ad blocking as a feature to your viewers, it is probably best to go it alone, especially if you have a very loyal readership. You can provide a more complete solution and not share your revenue with other sites.

That being said, one can always follow in Imgur’s and offer this alongside a standalone ad blocking or pro account feature. The two are not mutually exclusive and, as I said above, every dollar earned from this is a dollar that would have been missed otherwise.

Even if it isn’t much, every little bit helps.