Last week, Robert Kolker at New York Magazine published an article about Austin Obodai, a man known to some as “The Dread Obodai” and is described in the article’s headline as the “Content Farmer from Hell”.

The article goes out of its way to paint Obodai as something of a criminal genius. The article says that “In every legal action he’s taken, he has represented himself, and his legal filings are cogent and dense and filled with precedent-heavy arguments, suggesting a keen legal mind.” The author continues to say that he, “Came up with a novel method of exploiting intellectual-property law to invent a new type of fraud,” and that he earned his nickname from the Google lawyers he came to face.

The truth is though, that Obodai is no legal genius. His copyright lawsuits, to date, have all been defeated and Obodai, according to the article, was recently arrested and charged with wire fraud by the U.S. Attorney’s Office.

However, while he likely won’t be a threat to the companies he targeted much longer, individuals like him are dangerous for another reason. In addition to sapping resources from the companies they target, they make legitimate efforts to enforce copyright much more difficult, making it harder for everyone to protect their work online.

The Story of the Dread Obodai 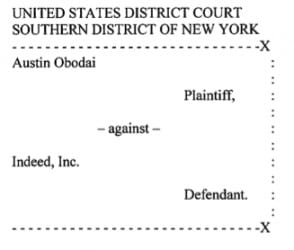 According to the article in New York Magazine, before Obodai became known for his copyright litigation, he was a content farmer. He operated (and continues to operate) a site named Choicehow that features tons of low-quality but keyword-dense articles that aimed to attract search engine spiders.

In June of 2011, Obodai filed a similar lawsuit against Google, this time over his content allegedly appearing in comments to YouTube videos, making many of the same arguments.

These two cases (relatively) quickly died out. Demand Media won an order of summary judgment against Obodai on the grounds that they were protected under DMCA Safe Harbor, which protects hosts from infringement when content is uploaded by third parties. Likewise, his claim with Google died after it was revealed the articles he was suing over were written after his registration with the U.S. Copyright Office.

However, during the months Google was dealing with Obodai, they discovered that the IP address the content was posted from matched an IP address that Obodai himself had used to send a cease and desist letter. That IP matched a public library near his home in Bronx, NY.

Undeterred, Obodai filed suit again. In June of 2012, he targeted the resume site Indeed.com, this time over some 20 of his articles. But this time the defendant simply did not push to make the case go away, Indeed filed a countersuit against Obodai, bringing evidence to bear that the poster on Indeed’s site, a user by the name of “John Daniels” was actually Obodai himself.

Specifically, according to the countersuit, within a 25-hour period someone from the same IP address created the new account, created a resume, uploaded the allegedly infringing works and then alerted Obodai about the alleged infringement. As such, Indeed sued for fraud, misrepresentation under the Digital Millennium Copyright Act (DMCA) and violation of the Computer Fraud and Abuse Act. That case is ongoing.

However, that civil case may be the least of Obodai’s worries, in August of 2013, Obodai was arrested and charged with wire fraud. Obodai then attempted to sue several of the attorneys involved in in the criminal action but that was quickly dismissed as prosecutors are immune to civil action for acts they perform in the line of duty.

In the meantime, Obodai’s trial is set for April.

If the article in New York Magazine and the various court filings to be believed, Obodai is far from a copyright genius.

Understanding the rules of timely copyright registration and DMCA safe harbor are not “technicalities” as the New York Magazine article writes them to be, but fundamental notions under the law. Furthermore, if the evidence presented by Indeed is accurate, then Obodai did not use proxies, VPNs or other tools to change his IP address and make himself appear to be from somewhere else, something that is trivial to do.

These are all fundamental mistakes that could have easily been avoided.

I also find the timing of the first lawsuit very interesting. April 2011, for those who remember, was a rough time for content farm websites as Google had just rolled out its “Farmer” update, which greatly devalued content farms in search results.

It’s likely that Obodai’s primary business model was suffering at the time and it’s easy to see how copyright litigation might seem to be a way to earn revenue off of content that was no longer generating money the traditional way.

Of course, advertising and copyright litigation were not Obodai’s only business models. He also included iCopyright badges with his content, encouraging others to pay him for the right to reuse their work. However, after contacting iCopyright about this story, they have terminated their account with Obodai. They also declined to comment.

Obodai was never a serious threat to the companies he sued, they are large enough to shoulder the cost of litigating against him and there were enough legal obstacles that it was unlikely Obodai would ever have won any damages.

The real threat, however, was to legitimate copyright holders who are dealing with real infringement. With every person like Obodai that abuses the law, companies like Indeed, Google and Demand Media get more and more wary of incoming DMCA notices and other copyright complaints.

While all DMCA notices should be sanity checked and obviously false ones should be tossed, when the DMCA notice and takedown system becomes a means to try and push lawsuits toward hosts, rather than a way to avoid them, it only makes providers more suspicious of the process and less likely to work with content creators.

In short, people like Obodai can easily poison the well of cooperation between hosts and content creators. That relationship has becomes strained enough in recent years and stories like this one only pull them apart even more.

If there’s one thing that almost everyone in the copyright debates can and should agree on, it’s that abuse of the law must be stopped.

Copyright abuse, such as what’s described in the filings against Obodai, hurts everyone involved. It harms legitimate creators by making it more difficult for legitimate grievances to be heard, it hurts those who want to take advantage of tools like comments because it pushes hosts to remove features that could be come magnets for copyright abuse and it creates a toxic climate for discussing changes in copyright law.

It’s the latter that could have the largest implications in the long run. Though what Obodai is alleged to have done is clearly unlawful under the current laws, many will see it as an example of copyright run amok and a reason to weaken copyright protection.

As such, those who value copyright law should join forces with those that seek to drastically reform it in decrying those who abuse it. If we don’t speak against such abuse, those who abuse the law may come to speak for us.

Simply put, we can not afford that.