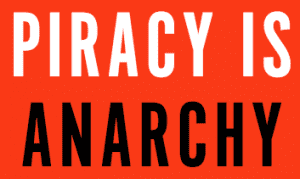 If you’ve been reading copyright news over the past week or so, it’s likely that you’ve heard at least a little bit about the controversial Artist vs. Artist campaign.

The campaign was launched by the band Ghost Beach. The group was approached by the retailer American Eagle, which wanted to use one of its songs in a commercial. As part of its payment, American Eagle gave the band access to its billboard, which is directly over its store in Times Square.

However, rather than using the space to advertise the band directly, the group decided to turn it into a statement about piracy. The black billboard features phrases such as “Piracy is Progress” and “Piracy is Criminal”. It also asks viewers to “pick a side” via Twitter hashtags, namely “#ArtistsforPiracy” and “#ArtistsAgainstPiracy” respectively and it promotes its Artists vs. Artists site that tallies the results.

At the end of the Artists vs. Artists sites are two links, one to purchase the band’s latest album and another to download it for free.

The billboard has certainly attracted a great deal of media attention and, at most recent tally, the “#artistsforpiracy” hashtag has over 90% of the tweets so far.

As for the band themselves, they’ve come out on the opposing side saying that, while they think piracy may lead to some great innovations in music, they are, “Ultimately against piracy.”

Still, it’s clear that Ghost Beach has started a conversation but what have we learned so far from it?

The Problem with the Campaign

Ghost Beach, on their site, says that “Our hope with this campaign is to stimulate the discussion on exactly what ‘piracy’ means to different people.”

While that’s a noble cause, the way the debate has been presented to date has created serious problems.

First, it has been presented in a very divisive tone. Encouraging people “pick a side” and only providing two choices. This “with us or against us” mentality has been one of the key problems that’s stifled the copyright debate for a long time as it’s created divisions over ideas that are not mutually exclusive.

For example, ideas such as “Artists should explore new business models” and “Piracy is ethically wrong” are not mutually exclusive. Saying that industries have to change and being frustrated at the rate of change doesn’t necessarily make you pro-piracy any more than saying “Artists deserve to be paid,” makes you anti-piracy.

The debates over piracy are complex and nuanced. They can not be summed up in a 140-character tweet and they can not be aided by creating artificial divisions.

The other problem is that the “debate” is turned into a popularity contest, one where the goal is to get the most “votes”. However, being in the majority does not necessarily make one right, especially in an unscientific and voluntary poll.

However, drawing the lines so crisply and setting a tally can serve to further polarize people, the majority may feel that they have the right to ignore the concerns of the minority and the minority can continue to feel as if they are an exploited group.

In short, what the copyright debate needed wasn’t for people to take a stand and to paint brighter colored lines, but rather, to find the areas of common ground and ways to achieve those goals.

What is Piracy Anyway?

Another issue with the campaign that was pointed out by Alexandra Goldstein at the Copyright Alliance is that there seems to be a big discrepancy as to what exactly piracy is in this debate.

On the Ghost Beach site, they say that they support “Working towards a digital retail/stream model, something similar to Spotify or Rdio.” and that they enjoy giving their music away for free.

However, those statements don’t mesh with their earlier ones that they are “more closely aligned with the digital consumer”, who they define as someone likely to define piracy as “another term for distribution.”

The problem is that downloading legal free music or using a legitimate streaming service, like Spotify, are not acts of piracy. They are perfectly legal and the latter even pays to support the artist.

In short, their acts to show they align with people who support piracy have nothing to do with piracy.

But Ghost Beach’s own words highlight how conflicted and difficult these issues are. On their site, they say they align more with the aforementioned digital consumer. But in their interview on Torrentfreak linked above, they say they are ultimately against piracy.

If Ghost Beach is having this much difficult accurately articulating their views on piracy across hundreds of words, what hope is there for good discussion in a 140 character tweet?

While I’m always happy to see increased conversation around these issues. Over-simplifications, polarizing arguments and lopsided discussions do nothing to forward the dialog. Whether I agree or disagree with the position being stated, these problems always frustrate me.

In the end, Ghost Beach has certainly done a great job promoting themselves. Their band has been featured in countless mainstream media articles, has seen a good buzz on Twitter and a lot of people know who that are that didn’t before.

But as for moving forward the debate and discussion on piracy? That’s much less clear. So far, it seems that the approach has largely served to deepen existing divides that need to be bridged. The Twitter stream looks like a shouting match with little meaningful discussion taking place.

I am made a bit more hopeful by blogs posts like this one from the “#artistsforpiracy” camp that should a deeper level of introspection and clearer views. If more dialog like this can happen, likely after the campaign itself has ended, then maybe it can do some good.

Still the copyright and piracy debates were already well under way before the campaign started and will continue long after. The greatest lasting impact of this campaign may not be to the discussion it hoped to create, but to the band behind it.

After all, there’s no doubt that they have benefited greatly from this and likely will enjoy the fruits of the campaign for some time to come.

As for the piracy debates, that remains to be seen.