Recently, iCopyright announced that they were phasing out their iCopyright Creator tag service in favor of a new series of plugins that would replace the service. Available for WordPress, Drupal and Joomla, the new system would offer more tools and easier integration.

But while the approach to integration is new, the big idea behind the service is still very much the same. iCopyright Article Tools + Syndication places various badges on your site that invites people to license content through it.

You, through your Conductor control panel can set the services offered, the prices charged for those services and even set many of them to be free.

But is it something you should add to your site? The answer truly depends on what you’re looking for in your syndication tools.

What is iCopyright Article Tools Plugin?

To be clear, iCopyright Article Tools is not intended as a replacement for other sharing services, such as those that encourage posting to Facebook, Twitter, etc. Not only does iCopyright not provide those services, but they published a report in 2009 that said such tools may increase infringement.

Instead, iCopyright’s tools are aimed exclusively, or almost exclusively, at those who want to encourage paid licensing of their content.

To do this, the plugin first has you sign up for an iCopyright Conductor account, which will require you to fill out a very long form with a great deal of information about you, your site and your work. Once you’ve done that and gotten your publication ID, you should be able to sign in and start adding the plugin’s toolbars to your site.

On that front, iCopyright’s plugin has two different toolbars you can add to your post, either a horizontal or vertical toolbar. Here’s the horizontal one:

The service also adds and interactive copyright notice, such as this one:

(Note: All of these toolbars are functioning so you can play with them, however, bear in mind that this article, as with the rest of this site, is licensed under a Creative Commons License and NOT under these terms.)

Clicking on the toolbar will open up a popup window that lets you license the content in a variety of ways including sending via email, printouts (including both by you and created by iCopyright), reposting on other sites, and other publication services. 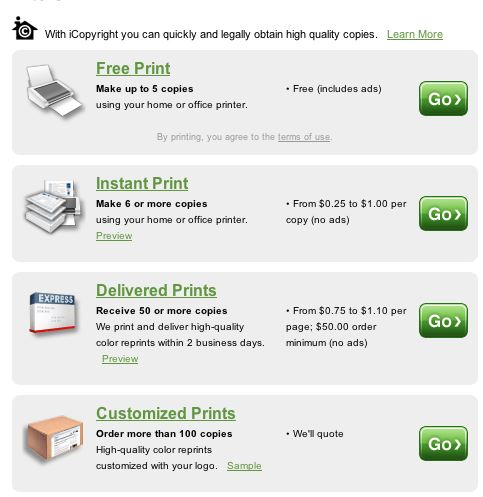 The end result, theoretically, is that users who want to license can do so easily through iCopyright, which in turn makes the process as simple as possible for the buyer an makes it hands-free for you as the creator.

But as great as that sounds, it doesn’t mean that iCopyright Article Tools plugin is right for you or for your site.

Are iCopyright’s Article Tools Right For You? 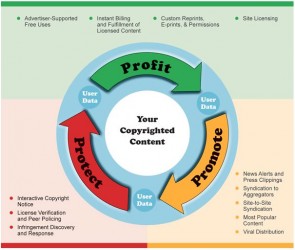 The beautiful thing about iCopyright’s Article Tools is that they enable any content creator, big or small, to get involved in licensing their content. Most such clearance agencies either only or primarily represent larger copyright holders, such as newspapers, magazines, etc. and don’t do much for smaller players like bloggers.

iCopyright not only lets such creators get into the game, but also gives them very granular control over prices. You can determine how much you want to charge for virtually every way you can license your work, including setting tiered pricing, as well as disabling/enabling various licensing systems.

That being said, that granular control comes at a price. Though installing the plugin is simple, setting it up, including signing up for your account and setting your pricing is going to take a significant amount of time and it comes with a pretty steep learning curve too.

The process, unfortunately, isn’t too much better if you already have a “Creators” account with iCopyright as you will have to have iCopyright convert your account over for it to work properly.

What this means is that iCopyright only practical for those who are serious about turning content licensing into a revenue source and not for people who just want to make it easy to let others email their articles (there are many other plugins/services for that).

It’s also worth noting that the plugin and its toolbars are a bit rough around some of the edges. In testing the plugin, I ran into a series of bugs, mostly revolving around the use of my old Creators account.

Fortunately, most of those bugs were resolved in the 1.3 update (though old accounts still need to be converted). There are also minor issues such as my theme not liking the plugin, causing it to display the toolbars on the front page as well as the single posts.

Most importantly though, I don’t think many bloggers are going to see any revenue from licensing their content in this manner. There simply doesn’t seem to be enough interest in this kind of paid licensing of blogger and smaller creator content as most of the sharing of such content is done via social networking and via tools that don’t require a license at all.

Even though iCopyright has licensed nearly 3 million articles this year, most of that is, almost certainly, from the company’s larger partners.

That being said, iCopyright may find an audience with mid-sized publishers with these tools. Sites that perhaps are too small to be considered a “big fish” but still large enough and in a good niche to see at least some licensing.

Someone who is casually interested in licensing probably will find these tools to be overwhelming in terms of complexity and underwhelming in terms of rewards. The true niche for this product is slightly upfield, with mid-sized publishers who can expect to earn some revenue, but not enough to warrant creating an in-house licensing system.

But even with that there are still some rough edges that need to be polished and definitely some room to improve the simplicity of the entire process on the creator side (as opposed to the purchaser side, which is very straightforward).

It’s also worth noting that iCopyright Article Tools are incompatible with Creative Commons Licenses, unless you use the tools to sell commercial rights not granted in the CC license.

In the end, if you’re in the niche that’s best served by these tools, you should definitely give them a try. But if you’re not, you’ll probably want to take a pass and find other ways to benefit from sharing, such as focusing more on social media.

Disclosure: I have done paid consulting for iCopyright in the past.